Large Patch also known as Brown Patch (Rhizoctonia solani) is a disease that occurs on all warm-season grasses, especially St. Augustine and Zoysia. This disease is most likely to be observed from November through May when temperatures are below 80 degrees. Infection is triggered by rainfall, excessive irrigation, or extended periods of high humidity resulting in the leaves being continuously wet for 48 hours or more.

This disease usually begins as small patches (about 1 foot in diameter) that turn yellow and then reddish brown, brown, or straw colored as the leaves start to die. Patches can expand to several feet in diameter. It is not uncommon to see rings of yellow or brown turf with apparently healthy turf in the center. Turf at the outer margins of a patch may appear dark and wilted. 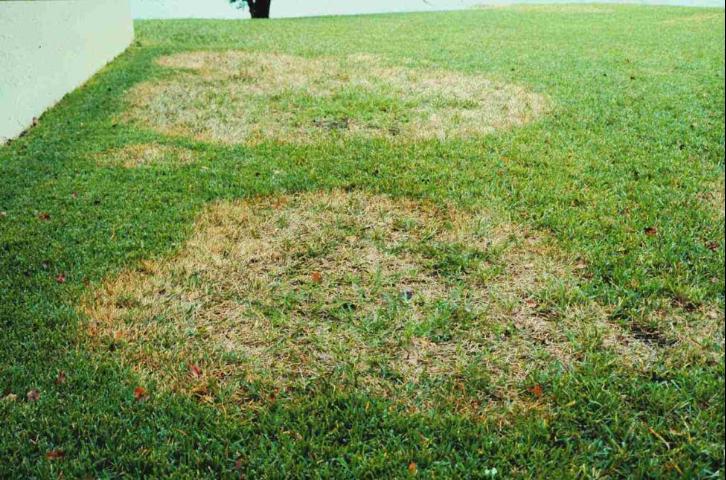 The best way to help avoid getting Large Patch is to irrigate on an As Needed basis during the early morning hours when dew is already present. Fungicides can be used once the disease is present, however, they only stop the disease from spreading they do not promote turfgrass growth.

The turf must be actively growing in order for the diseased turfgrass to recover. Symptoms do not disappear until new leaves develop and the old leaves are removed by mowing or decomposition. Since the disease normally occurs when the turfgrass is not growing very rapidly, recovery may be very slow.